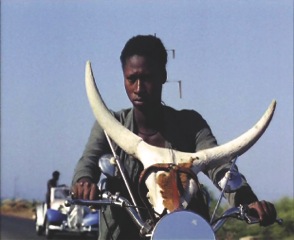 Based on his own story and script, Mambéty made Touki Bouki with a budget of $30,000 – obtained in part from the Senegalese government. Though influenced by French New Wave, Touki Bouki displays a unique style of its own. The main characters are Mory who is a charismatic cow herder who rides a motorcycle mounted with a horned bull-skull, and Anta, a student he meets in Dakar. They dream of emigrating to Paris. The film’s themes revolve around the hybridisation of Senegal, and the push and pull between the characters as they struggle with their own circumstances, culture, and the lure of a new life in Europe.

The film has a frenetic rhythm uncharacteristic of most West African films, more often known for their slow-paced, linearly evolving narratives. Through jump cuts, colliding montage, and the juxtaposition of premodern, pastoral and modern visual elements, Touki Bouki is an outstanding film that has a resonant pertinence today where buzzwords like ‘mass immigration’ and ‘economic migrants’  make the headlines in the tabloid media.

Red Snapper formed in the early ‘90s. Signed to the influencial WARP records they took to the scene using a blend of jazz and electronics. Mostly known for their instumental music they became part of the fabric of alternative club culture and by 2001 the band had played and worked with artists including The Prodigy, David Holmes, Björk and The Fugees and played festivals the world over. They released four albums and worked with vocalists Beth Orton, Alison David, MC Det and Anna Haigh and remixed the likes of Garbage, Edwyn Collins, Howie B, Galliano, Lamb and Trouble Funk amongst others.

This exciting project is suitable for festivals and special events