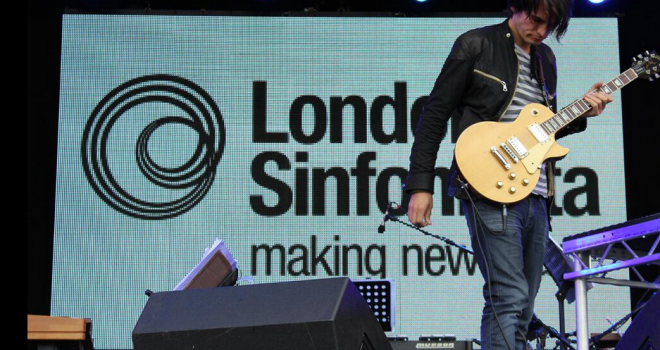 No-Nation was engaged to facilitate the development of London Sinfonietta’s Radio Rewrite project for a performance at Glastonbury Festival. This included securing the involvement of Radiohead’s Jonny Greenwood to perform Steve Reich’s Electric Counterpoint alongside the orchestra’s performance of Steve Reich’s Music for 18 Musicians.

Jonny Greenwood is best known as the lead guitarist of Radiohead, but is also well known as a contemporary classical composer in his own right. Greenwood’s work smear for two ondes martenots and ensemble was premiered by the London Sinfonietta in March 2004 and later released on the London Sinfonietta label as part of the Jerwood series. Greenwood’s compositions also extend to film scores, having written the music to the Oscar-winning There Will Be Blood (2007).

In March 2013, the London Sinfonietta performed the world premiere of Steve Reich’s Radio Rewrite at Southbank Centre’s Royal Festival Hall, before taking it on tour to Brighton, Birmingham and Glasgow. A London Sinfonietta commission, Radio Rewrite is inspired by the music of Radiohead, in particular, the songs Jigsaw Falling into Place and Everything in its Right Place. The commission was supported with the help of donors from Sponsume who made music happen. This summer’s performance of Reich’s music at Glastonbury by the London Sinfonietta and Jonny Greenwood will be a great celebration of this long-standing collaboration

Steve Reich has been hailed as “America’s greatest living composer” (The Village VOICE), “the most original musical thinker of our time” (The New Yorker) and “among the great composers of the century” (The New York Times). His music has influenced composers and musicians of all genres from around the globe, embracing jazz and bebop as well as the music of Bali and Central Africa. – See more here