Flanders in the world 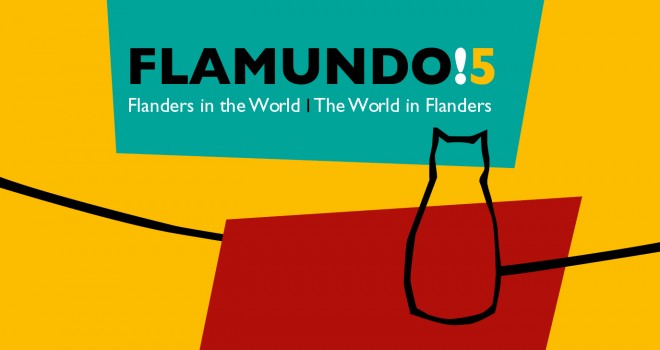 No-Nation’s Guy Morley was delighted to be asked to help select artists for 2014’s Flamundo CD, an collection that draws on the diversity and strength of artists from Flanders.

Let us introduce the CD to you:

It kicks of with a collaboration between David Bovée (Think of One’s) and Congolese musician Dinozord. The project is called Schengen Shege. You might remember BBC Award winner Think of One from the excellent Crammed Discs label.

Next up is a production of Homerecords.be: Mamy Kanouté who was one of Baaba Maal’s principle backing singers alongside Brussels based Kora player Bao Sissoko. The track stands out because of Wouter Vandenabeele’s audacious string arrangements.

El Juntacadáveres expertly combine a heady mix of Tango with electronic beats and other influences.

MW’Soul is the afore mentioned Mâäk‘s project directed by trumpeter Laurent Blondiau with Tunisian singer Ghalia Benali. As superb and as deep as it could possibly be.

La Sieste du Dromadaire is an insightful project by Ananta Roosens who was the violinist from the Gotan Project. Don’t expect those urban inflexions though this reflects a love for intimate chamber music and tango.

Black Flower are perhaps best described as being a brilliant alternative un-straight ahead jazz outfit with a great overdriven Rhodes sound and a fascination of Ethiopian and afrobeat groove.

MANdolinMAN are one of Flanders hardest gigging outfits, playing all over the world. The quartet has a unique take on Bossa Nova centring on their virtuosic mandolin playing.

Hijaz are a quartet named after an Arabic musical scale and includes both oud and piano. They have a beautiful articulate, open and lyrical quality that uses Arabic music as a satarting point but is defiantly jazz

Next are two projects that have an orchestrated element: ZIKR Project (now called Askanyi) was set up by the Brussels violinist Sebastien Paz Ceroni to reflect the multicultural reality using western classical and African vocal music. The stimulus for the project was four sacred African polyphonic songs which were then arranged for voice and string quartet by four different composers. Then his Safar Republique featuring Baba Sissoko takes us on a wonderful journey reminiscent of the Penguin Café Orchestra

Taking us toward a folk direction is Melike Tarhan is a Belgian singer and composer with Turkish roots – she received high praise for her first album (released by Long Distance/Harmoniamundi), and this track from her latest is beautiful with saxophonist John Snauwaert.

Aurélie Dorzée and Tom Theuns are a wayward musical duo. A kind of experimental pop-folk where improvised music and classical merge in a surreal performance. Catch them on their own concert barge. For their latest album they invited the Senegalese percussionist Serigne CM Gueye.

Then there is Jawhar Basti from Brussels who has Tunisian roots. A folk and soulful song-writer whose roots are in north-african chaabi and Nick Drake folk.

Fitting in somewhere between the alternative francophone sound of bands like Les Négresses Vertes and Têtes Raides is Jaune Toujours; punk, pop, jazz, dub, ska and Balkan influences combine in an atypical way – no guitars, a front person who plays the accordion and a steaming rhythm section with added horns.

Keeping the tempo up UTZ take us back in a funkier Brazilian direction followed by a production of Muziekpublique: Malick Pathé Sow & Bao Sissoko featuring Talike Gelle two great Senegalese musicians now living in Belgium. Live, they create an exquisite, trance-like set that is remarkable for Sow’s warm, soulful vocals and the skill of their musicianship.

We wind up with Olla Vogala, an orchestra founded by violinist Wouter Vandenabeele and brings together classical, world, folk and jazz. From medieval music, auvergne bourrées, Monteverdi, Flemish folk melodies, Arabian songs, ancient French ballads, a-capella, performance, recipes in Middle-Dutch, original material, and improvisations, alongside a healthy dose of experimentation.
I’m sure you’ll agree that there is plenty to enjoy here – and much to reassert that Flanders is still an interesting place to be. And where their musicians and artists can inspire your audiences.